The Rings of Gold Awards recognize an individual and a program dedicated to helping children develop their Olympic or Paralympic dreams and reach their highest personal potential. A four-time world champion and Olympic bronze medalist, Paraskevin founded the Connie Cycling Foundation to spread the lessons and values she learned throughout her career as an elite athlete. Since its inception in 2005, the California-based CCF has introduced more than 6,000 youth to cycling with an emphasis on age-appropriate instruction and positive coaching experiences. Many CCF riders have advanced to represent USA Cycling at national and international competitions. Bikes are supplied free of charge, helping bring kids and families of all backgrounds and abilities together through cycling while offering opportunities for education, competition and healthy life skills development.
Read full release>>

I am honored and I appreciate the recognition for everyone who stands behind CCF; instructors, volunteers, parents, our team of donors and the LA84 Foundation.  --Connie

Presenting the award on behalf of the USOPC was CCF alumni Gavin Hoover.  How great is that!  Gavin was fresh off his medal winning performance at the Pan American Track Championships.

USOPC Media Release:
​Another legend in sport, Connie Paraskevin, received the individual Rings of Gold Award for her work with the Connie Cycling Foundation. A five-time Olympian and one of only 10 U.S. Olympians ever to compete at both the Summer and Winter Games – cycling and long track speedskating, in her case – Paraskevin founded the CCF in 2005. It has since introduced more than 6,000 kids to cycling, which in turn has provided them with life skills such as confidence.

Paraskevin was presented the award by Hoover, whose journey began with the CCF.
“Connie embodied the Olympic ideals in everything she did – from how she spoke to us, to how she expected us to carry ourselves,” Hoover said.
​
“Connie believes that sport and the pursuit of excellent can change all children’s lives – not just the few, like me, who go on to pursue their Olympic dreams. The lessons I learned through CCF have impacted every aspect of my life. Even though I left the program at age 16, it’s still Connie’s voice I hear in my head, and I know I’m not alone.”
​read full release>> 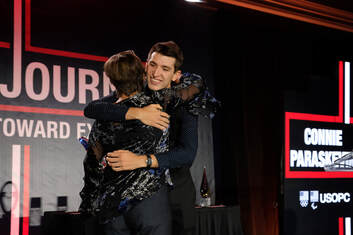